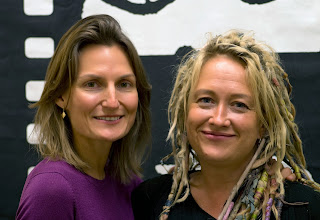 Jennifer Lynch, daughter of famed film director David Lynch, was in Chicago recently to promote the film Despite the Gods, a documentary directed by Penny Wozniak. The film traces Lynch's time in India in 2008 directing a Bollywood production called Hisss. The shooting was plagued with all sorts of problems and afterwards, the producers recut the film without Lynch's approval; she has since publicly disavowed any connection with it.

I sat down with Lynch and Vozniak at the offices of the Chicago International Film Festival to talk to them about this film as well as Lynch's experience making it.

Tom Hyland: I never did understand. Why did Govind (Govind Menon, the producer) ask you to direct this film? Did he ever explain why he chose you?

Jennifer Lynch: He never did, but I have my impressions. He saw Surveillance (a 2008 film directed by Jennifer) and I was a female who was a filmmaker and I had a famous last name, so there was a lot to be said for going to India with a Lynch for a Hollywood/Bollywood production. I think within that he had anticipations of how he could promote it and even after reading my script, I think he still thought this was the kind of movie he would be making, not the kind of movie I would make. To me, if you've seen Surveillance, you know what kind of filmmaker I am.

To me that was the most heartbreaking, strangely illuminating part of this; the fact that Penny was able to show me things I couldn't see, but now with time, you know I can look back and realize that he hired me for a different reason than to be myself and never told me. Maybe he didn't even know himself - I'm not suggesting there was any malice in it. I think that he saw an opportunity as a producer to make a big sound.


TH: Clearly he was very impatient with you. Do you think that was the system of getting this movie done or was it just him or was it any number of things?

JL: It was a lot of things. It was a very trying situation for everybody. You know, nine months - you can imagine the footage that isn't in there!

Something was going unexpectedly every day. I can't guess, I can tell you that my biggest sadness is that after an experience such as that is Govind and I don't speak. I'm sorry that he felt the only way to gain control of the movie was to take me out of it, instead of communicating with me like "actually, here's the kind of movie we need to make. Let's sit down and make this movie together."

Whatever my part in that is, I'm sorry. I'm a work in progress like the rest of us. I can't guess what his motivations were. My heart tells me that none of it was malicious. I think that he hired someone who had a stronger and more individual voice than he anticipated and I don't think that he was willing to communicate to me at any point - whether he realized it or not too late or earlier on - exactly what the deal was. "Actually what we need to do is to make this kind of movie and I'm using your name and this is what has to happen."

You know, I'm not retarded. I get that this is a money making business. But I was told the opposite - make your movie. Again, it wasn't every day that he and I were butting heads, but those were the most exciting days for Penny.

I can't guess. I can say respectfully I shared many good times with him and I shared a lot of drama with him. I wish we could have come out on the other side with some sort of communication, because it was brutal.


TH: (To Penny Vozniak): How did you get involved in this project?

Penny Vozniak: Actually, I wan't meant to be in India. I was on my way to Afghanistan as I got a grant to make a little project there. I stopped in Mumbai because Govind was an old friend of mine. I had been in India several times before just visiting and I stopped in Mumbai and he asked me if I could do a big favor and stay an extra week and babysit Sydney Lynch, Jennifer's daughter (she was 12 at the time, TH).

I didn't really want to, I didn't want to babysit, I wanted to make a film. But I wanted to help my friend, so I babysat Syd and she was adorable, which was fun and we hung out and then I got to know Jennifer over that week and by the end of it, I was very curious. I fell in love with them, as everyone does when they first meet them. Jennifer wanted me to stay as well and she talked to Govind and they came up with this idea that I'd shoot a behind-the-scenes.

I don't like behind-the-scenes, I don't even think I've watched one, as they doesn't interest me. I'm not interested in the movie making process at all. I'm interested in stories and people's dynamics.


TH: Had you made documentaries before?

PV: I had been working on a documentary at that point for four years and I'm about to finish it now. It's about the world's real-life super heroes. I just wanted to make my own stories with real people. That's all I've ever wanted to do. So I didn't want to make this film in India, but I was offered a bit of money for it and I thought that this would help my other project, so I'll do this as a paid job.

But then about two weeks in, I was getting stuff that they would not want to use in the DVD extras, this is scathing, like Jennifer talking about getting her period and sex and I'm thinking, maybe this isn't appropriate. So I remember at one point, I said to myself I'm going to make an observational documentary about Jennifer. She's a misunderstood filmmaker. She's not everything you think she's going to be. It's very easy to look at Jen and think, "Oh, she grew up very priviliged. Hollywood royalty, the daughter of David Lynch..."

TH: I wouldn't think that, Hollywood royalty with David Lynch...

TH: If you were Cary Grant's daughter, I might think differently.

PV: But to me as an indie filmmaker lover, this is the pinnacle of it. She's got this wonderful kind of legacy.

Then about halfway through the story, I went, "I'm filming this story about Jennifer." It's about this, it's about something I won't realize until I get to the end, but I loved that, it's a treasure hunt. 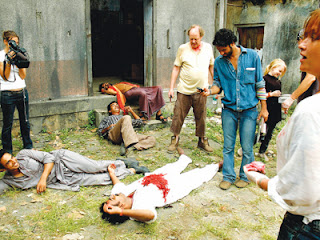 TH: Two things I noticed as I watched the film again. One was a member of the production team saying about two-thirds of the way through the film, "This is mayhem. This is India. Isn't it beautiful?" I thought it was a great line.

Then there was a scene where a medicine man or priest throwing oil on the script or blessing the production and then there is a cut of you winking, like, "OK, see what I have to go through." I thought that was a perfect moment.

JL: Yea, this is what you do. It's also that the crew had become superstitious and it was Christmas, so they put the slate down on a plastic chair in the jungle and we all sat and closed our eyes and listened as he prayed. And if you thought about it too much, you'd kind of lose your mind and yet it was this beautiful thing we're celebrating. And we're all a little afraid as every day something goes what you would call wrong. And I kept trying to be Zen-enough about it, to make some sort of day out of it.

There it was, of course, it's a plastic chair in the jungle and we're throwing flowers on it and burning incense. What else could it be? Oh, and it was beautiful, so when I saw she had the camera on me, I winked. I remember the moment. I was thinking, maybe this will help.

PV (speaking to Jennifer): Yes, you were on the ride!

That's what I loved about those subtle moments - they didn't need any words.


TH: Two final questions. Ok, let's pretend that Penny's not here. Objectively speaking, if someone saw this, they would think this is not a very flattering portrait of Jennifer. What do you say to that?

JL: You know, part of me agrees and part of me says, that's who I was there and that's a lot of who I still am. I hope that there are some flattering moments... put it this way - that's who I am. So the terror and the joy in letting her film me and forgetting quite often that she was filming me is...

TH: You're a creative person...

JL: That's what happened and she didn't change that. I can't say, "I didn't do that. That actress didn't portray me correctly." It's authentic.


TH: Last question. I see that you're working on a film and your father appears in it. (A Fall From Grace.)

JL: I'm about to shoot this film and yes, he is playing a very beautiful sort of dementia-ridden older man in it. It's a very small role.

TH: Knowing the type of filmmaker he is, I would imagine he would let you do your thing.

JL: Oh, yeah. All we ever say to each other is, "it's common fucking sense. Go have fun."

And as absurdly simple as that sounds, that's what it is. And in any situation... so suddenly this blew up. OK, it's common sense. I've got to get from here to there.

He said no at first, "I can't do it. I won't be good enough." But then we talked about a few things and he got a look on his face and a tear welled up as I was saying some things to him and I said, "That's it. That's William right there. Can you do that?" And he said, "yeah."

You remember, he was in that movie with Isabella Rossellini (Zelly and Me, 1988), so he's acted several times.